"Globalisation can be considered as a form, a space or field made possible through improved means of communication in which different cultures meet and clash"
-Mike Featherstone, Global Culture - Nationalism, Globalization, and Modernity : a Theory, Culture & Society, 1990.

Global Branding has taken over as brands now sell a certain lifestyle, idea, attitude and myth. They sell status. Whereas, in the 50's/60's brands were just the present products of the time.

The Fashion Trade
The outing of the logo on clothing happened in the early 1970's but logo inflation began in the mid 1980's pioneered by brands such as Lacoste and Ralph Lauren. There was a growth of fashion fanatics and brands began a sponge within subcultures.
Ben Sherman and Fred Perry were taken on by the mods in the 50's and 60's but the brands have reemerged over the years. Although they have both always been popular, Fred Perry was absorbed by the Chav subculture in the 1990's - 2000's. So this shows how brands can have different connotations within society. Now, Fred Perry seems to have been absorbed by the Indie/Hipster subculture - http://www.fredperrysubculture.com/ This website I came across is representing new up and coming independant bands - which we have found that Hipsters follow.
The style and look of the people shown on the homepage reiterates the other information we have found throughout the blog. Although there is no 'hipster triangles' the shapes at the bottom relate to other design work I have seen classed as Hipster with triangles and other shapes. 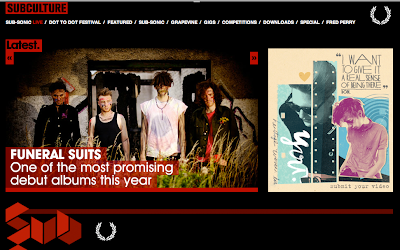 This article at the bottom of their homepage explains better how I am trying to say that brands reemerge over the years creating different connotations as they are adopted by different subcultures. This also relates to how subcultures get absorbed by the mainstream and can later reemerge. 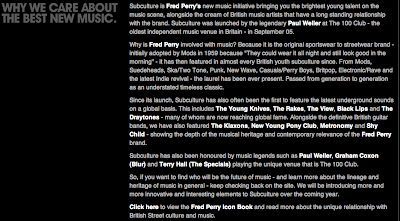 http://www.spiegel.de/international/zeitgeist/0,1518,817185,00.html If you follow this link you can see how the Punk Subculture has reemerged and become something different over the last few years and has become the biggest subculture in Burma.


"We young people in Burma have become punks to protest against the political and economic situation in our country," Kyaw Kyaw says. He says there are about 200 punks in Rangoon and perhaps another hundred in Mandalay, the country's second-largest city.
Posted by Katie Jayne Roberts at 02:42