A skinhead is a member of a subculture that originated among working class youths in London, England in the 1960s. Named for their close-cropped or shaven heads, the first skinheads were greatly influenced by West Indian/Jamaican rude boys and British mods, in terms of fashion, music and lifestyle.


Skinheads range from a clean-cut 1960s mod-influenced style to less-strict punk and hardcore influenced styles when the skinhead subculture was revived in the late 1970’s after the introduction of punk rock.
From 1979 onwards, punk-influenced skinheads with shorter hair, higher boots and less emphasis on traditional styles grew in numbers and grabbed media attention, mostly due to football hooliganism. 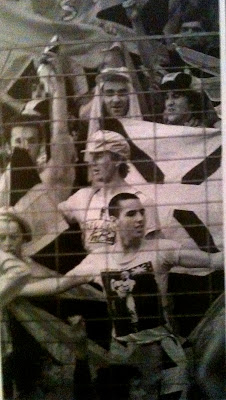 This explains better what I was trying to touch on about how subcultures merge from others. It seems that the Punk subculture grew from the skinheads as well as the the more clean cut mods.


Punks
“It reminds me of the T.V. series “Roots”, seeing those chains and the dog collar round the neck.” (A punk’s mother interviewed in Women’s Own, 15 October 1977)


The punk aesthetic, formulated in the widening gap between artist and audience, can be read as an attempt to expose glam rock’s implicit contradictions. The punks capitulated to alienation, losing themselves in the unfamiliar contours of an alien form. In this way, the very factors which had dictated skinheads’ withdrawal in the late 60’s facilitated the punks’ involvement a decade later. 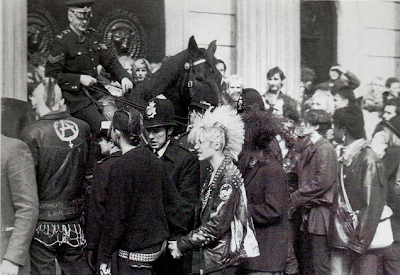 "a subculture... signals a break down of consensus." (Dick Hebdige)


These extracts I found in Subculture - The Meaning of Style, explain how subcultures are always resisting the mainstream. It is:
a) a refusal to participate in mainstream culture.
b) a desire to subvert or parody.
Posted by Katie Jayne Roberts at 11:40