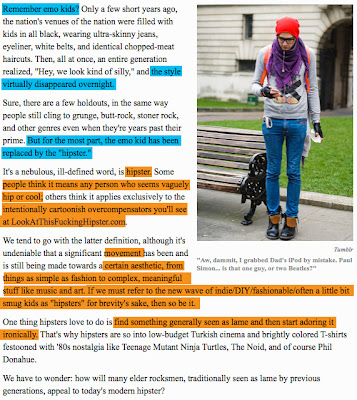 ( Cited in Houston Press )
I like the concept of a subculture transforming in something else. Though this is a interesting article with how the subculture keeps a similar theme, like with emo and hipster with the subculture being centred on the independent music scene?! (which I will explore in the next post)

Evolution of the Hipster 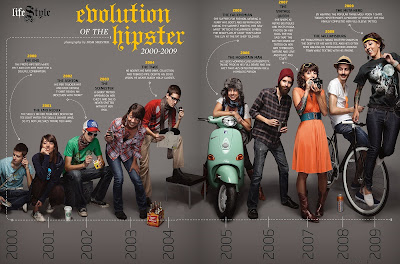 (cited on Paste Magazine )
Think this image is interesting as it separates all the part of the Hipster (till 2009) we have already found out about into stages. I do not know if this is a true evolution of a group but it visuals some of the stereotypical image of a hipster (as it would, as it is constructed).


I feel we need to defiantly explore the context of the hipsters and maybe be even the emo/scene subcultures context. Whats going on in the world? What is their counter culture countering? Consumerism, with the second hand/ vintage clothes?
Same with Skinheads and Punks, what was happening in the world to cause these people to form this identity/subculture?
Posted by Unknown at 09:14