At a time when middle class hippies, flower power, student mysticism and love-ins were getting attention of the media, the working class youths of the skinhead movement adopted an aggressive form of behaviour, in keeping with the tough uniform of their boots and braces.

The skins were passionately interested in football. the first appearance at away matches of massive groups of skinheads, all uniformly dressed and intent on smashing their opponents into the ground, must have been rather unnerving for the managers of those clubs who were hoping to turn football watching into a family outing.

Clashes with the police and opposing supporters, and taking part in the ritual songs and chants of the football ground, together with the opportunity to get drunk and run amok, provided the sort of power and excitement which is normally denied to working class youth.

Chris Welch has written "The sight of cropped heads and the sound of heavy boots entering the midnight Wimpy bar or dance hall is cause for sinking feelings in the pit of the stomach."

Football hooliganism is still happening in today's society.
Has this been taken over by a new subculture now? 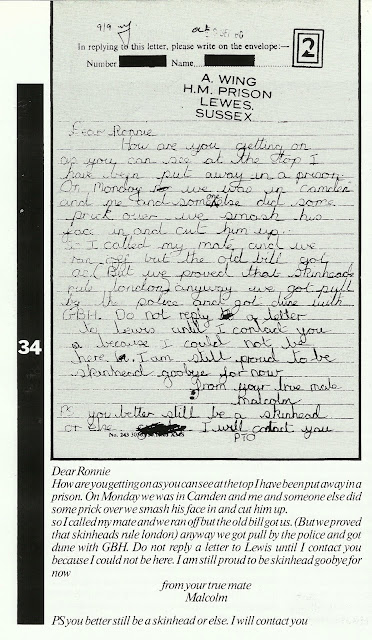 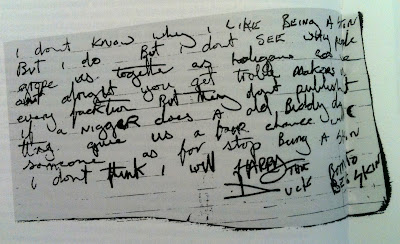 “I DON’T KNow why I LiKE BEINg a SKIN But I do. But I don’t SEE Why people grope us together as holigans ‘cos we ain’t alright you get troble makers in every facktion But They dont publish it if a niggeR does a old Biddy do they give us a faiR chance will someone as for stop being a SKIN I dont think I will."
Harry the Duck, Born TO BE A SKIN


The really bad grammar/spelling etc in both of these suggest that they haven't had much of an education and focus more on being a Skin. 'But we proved that skinheads rule london' implies that they are trying to prove something to the parent culture/mainstream. It suggests that by going against society they are the rulers and have authority even when 'the old bill' arrests them. 'You better still be a skinhead or else' proposes how strict the culture is. It seems that once you're a Skin you're always a Skin. 'Born to be a skin' in the second note backs up this idea.


The attitude of Trevor in the clip below, "They're all fucking wankers" "everything they teach you at school is useless", suggests how Skins rebelled against education which explains the note and letter above. It seems that Skins like Trevor would rather be honest to their subculture and go to prison for their actions than be part of the mainstream and obide by any rules.
The Swastika tattoo on his forehead backs up my research on the use of tattoos in this subculture. Tattooing was used by the Nazis in concentration camps to tag prisoners which could relate to how they may feel in the parent culture 'as prisoners' so they rebel against it. It also suggests that the Skins are supporting the beliefs of the Nazis.